The idea that became the Hitchhiker’s Guide happened whilst Douglas Adams was lying drunk in a field in Innsbruck.

The Hitchhiker’s Guide to the Galaxy[1] (sometimes referred to as HG2G,[2] HHGTTG,[3] H2G2,[4] or tHGttG) is a comedy science fiction series created by Douglas Adams. Originally a radio comedy broadcast on BBC Radio 4 in 1978, it was later adapted to other formats, including stage shows, novels, comic books, a 1981 TV series, a 1984 video game, and 2005 feature film.

The Hitchhiker’s Guide to the Galaxy has become an international multi-media phenomenon; the novels are the most widely distributed, having been translated into more than 30 languages by 2005.[5][6] The first novel, The Hitchhiker’s Guide to the Galaxy (1979), was ranked fourth on the BBC’s The Big Read poll.[7] The sixth novel, And Another Thing, was written by Eoin Colfer with additional unpublished material by Douglas Adams. In 2017, BBC Radio 4 announced a 40th-anniversary celebration with Dirk Maggs, one of the original producers, in charge.[8] The first of six new episodes was broadcast on 8 March 2018.[9] 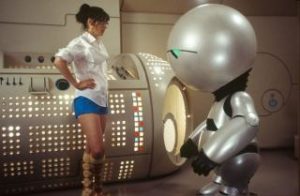